Regrets: There are Benefits 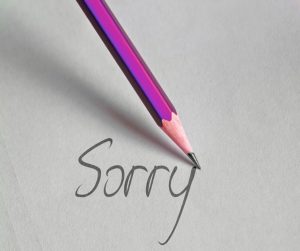 Recently, while laid up at home and too sick to do much of anything, I ended up watching a bunch of TV and videos.  After way-too-many-hours of general poor quality “entertainment”, I stumbled onto a few TEDTalks.  I’d watched them before and had really enjoyed them, finding these talks not only entertaining, but also educational and thought-provoking.

On this particular afternoon, I clicked onto a talk that was about the regrets of the dying.  Feeling at the time that I too was nearing my own ultimate demise, feeling sorry for myself and generally pretty crummie, I ended up watching this cheerie subject matter.  As I started to watch, I thought to myself, “why in the world would this be a topic of interest, the regrets of the dying…really?”.

The speaker went on to list the top five regrets of the dying. This apparently was a research-based finding, and so, being someone who pays some mild attention to the findings of empirical, rather than antidotal, research, I watched and listened with an increasing degree of interest, along with a health dose of a ‘ready-to-dismiss’ attitude.  Accordingly then, the top five regrets of the dying are as follows;

How Does this Change Regrets?

Well, I started to think, how might any of this research and information about regrets be useful.  It is sort of sad that so many people were lying on their death beds having so many fundamental regrets. Thematically, these regrets suggest it is about human connection and relationship with other people, but also (and perhaps more importantly) with ourselves.  It also speaks to choice, and choosing how to be within the world, especially emotionally.  This then leads to the following wondering;

If you were lying on your death bed today, what would you regret?  This isn’t an easy question to answer, but give it a try for yourself.  What would you regret if you were to die today? Be honest with yourself. The question is worthy of deep consideration and thought because it will give you a compass-setting about what you need to change in your life.  For example, if you were to regret not spending more time with your children, then this clearly indicates to you that you need to spend more time with them! No brainer right!  This is easier said than done though.  If you share the same universal regret of wishing to be happier, well, this then begs the question, ‘how/what do I change so that there is more joy and happiness in my life?’. This naturally will be very different for all of us, but again, it is worthy of contemplation and consideration.

Lastly, my wish for us all is that when we are ultimately nearing our ending days, that we do not have any regrets, but rather are filled with appreciations for the way we have lived our lives.

How to “buy” happiness?

Can money buy happiness? It is a natural tendency to think that more money can…

Is your relationship in deep trouble if you don’t celebrate Valentine’s Day?

Valentine's Day and relationships go together like bees and honey!  But do you and your…