Cognitive Behavioural Therapy (CBT), is a common therapeutic approach used by many Waypoint counsellors in Victoria, BC.  CBT  is a very structure approach to common emotional and psycholgoical matters.  CBT is particularly useful in working with anxiety, depression, low self-esteem, anger, among others.

Cognitive Behavioural Therapy is based on the idea that whatever you are feeling, is likely due to how you are thinking about a situation or circumstance.  Often time, folks will get stuck in negative styles of thinking, which contribute to negative emotions and moods. 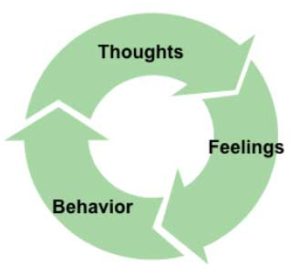 CBT essentially aims to identify negative thoughts and thought patterns, and understand how these are connected to a negative emotional state.  For example, folks who dwell on past events, tend to over-think and question themselves and their interactional experiences in the past.  If too much time is spent thinking about past events, it often can lead to feel depressed and insecure.

CBT interrupts these negative thoughts and thought patterns by asking folks to rationally review the thoughts and gauge their merits and validity.

CBT has a plethora of tools and interventions. However, the most basic and fundamental intervention in CBT is called the “Thought Record”.

The Thought Record is a worksheet used when someone noticed a negative change in their mood.  In it classic form, the Thougth Record asked folks to record then record the following information.  That is just before one started to have negative feelings, the worksheet calls for a review of these qualities and characteristics, such a (i)  date/time, (ii) what occurred, (iii)  what feelings came up, (iv) what thoughts, especially negative thoughts, came up, (v) which of the feelings is the ‘hottest’, (vi) which of the thoughts are the ‘hottest’, and (vii) how true is the thought, and lastly (viii) what is the evidence that support the thoughts and (ix) what is the evidence that contradicts the thougth.

George is the Clinical Director at Waypoint Counselling & Referral Centre. He has been a Registered Clinical Counsellor since 1991, working and teaching in a variety of counselling settings.

Waypoint counsellors are here to help when learning to deal with bad moods. Our office in downtown Victoria is a safe place to receive guidance and help make the best decisions to do with you life.

What is Negative Thinking? Negative thinking is a habit many of us have.  It is…

4 Ways to Reduce Anxiety and Depression during COVID-19

Negative Thinking Leads to Anxiety and Depression Regardless of COVID-19, we typically have over 50,000…